From iMacros
Jump to: navigation, search

Important: iMacros for Firefox versions 8 and 9 do not work with Firefox 56 and above. 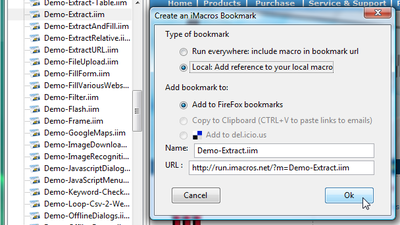 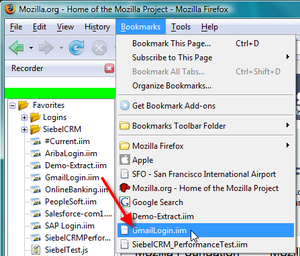 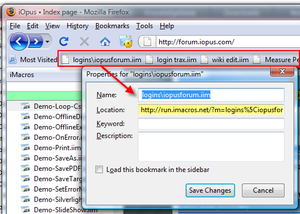 Know other good tutorials or screencasts? Please let us know at imacrosSupport@ipswitch.com!

Note: The above syntax is currently broken in Firefox 52 and later (see Known Issues below).

Note: The above syntax is currently broken in iMacros 9.0.3 (see Known Issues below).

Note: When you first start Firefox via the command line the iMacros extension is not immediately active. It may take a few seconds for Firefox to activate it. So the imacros://run/ command does get intercepted already but not yet processed by iMacros and a blank page appears.

The BEST solution: If you need an easy and powerful way to control Firefox you can use the iMacros Scripting Interface that is included with some of the iMacros paid editions. This method gives you complete control over Firefox ,Chrome, Internet Explorer, and the iMacros browser. For example, you can return error codes or extracted data from the browser to your program or script. 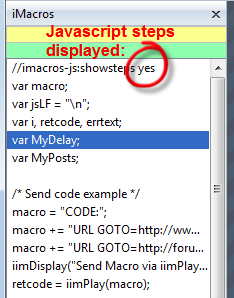 iMacros stores everything on your PC. In other words, no iMacros information is stored on our website. iMacros is not an online service. We never have access to your macros or scripts. This includes the social scripting feature. Even in this case our servers are not involved.

If you want share you macros (social scripting) and select the option "Run everywhere: Embed macro in URL" in the bookmark menu then the macro is encoded in the URL (link). This feature is useful if you want to email the URL (= macro) to your friends and coworkers who have iMacros installed in their browser, or want to embed the macro in your website or blog. This means visitors of your website or Intranet page can run the macro. Again, no macro information is stored on our website. The URL contains the complete macro (For experts: The macro is BASE64 encoded).

You can add the iMacros bookmark url with the embedded macro to a social bookmarking service like http://del.icio.us/. Then the information is stored on their website and other users can run your macros. as long as they have iMacros installed in their browser. It is your decision to share your scripts, and our website is not involved in this.

Technically what happens if you call a URL that starts with javascript:(function()... is that if iMacros is installed in that browser, it intercepts the URL and executes the macro. That's all and it happens locally on your machine. If no iMacros add-on is installed, then a simple web page is opened that provides the user with a download link to iMacros.

Important note for iMacros Enterprise Edition users: The updated iMacros Firefox Scripting Interface requires iMacros V9.50 (not yet released) imacros_scripting_patch_v9.50.zip. After downloading the patch, unzip and run "install.cmd" as administrator. It updates the Firefox connector to the latest version. This patch supports both, iMacros 8 and 9.