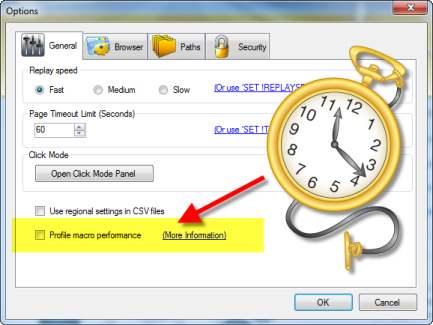 There are three possibilities to switch on the performance profiling. They differ however on its persistence, and where the performance xml data is written (either to a file, or to a variable which can be only retrieved via the scripting interface):

NO: no log file will be output. Performance can be retrieved via iimGetPerformance() (new method in this version's scripting interface)
<file name>: the file for output performance log. A full path can be given as well. Default folder is iMacros\Downloads, default file name is Profiler_yyyy-MM-dd.xml.

When this command is used, profiling is done for the current macro, starting at this command.

We provide an xsl style sheet in iMacros 7.30 distribution (Downloads folder) for a comfortable visualization of the xml profiler output, by opening the xml file directly in IE for instance.